The History of Electrical Wire Colours in the UK

Electrical wiring in the United Kingdom is defined as any type of electrical installation designed for operation by end users in industrial, commercial, or domestic buildings. This may also include special installations such as caravan parks, marinas, and more. The installation can be differentiated using a number of factors including voltage (high, low, extra low), nature of electrical signal (power or data), phase (single and 3 phase), the type and design of cable, circuit design, and others. Electrical wiring is regulated under the Building Regulations 2010. The guidelines outline various safety measures that need to be put in place during installation.

Quick Fire Question: When Did UK Wiring Colours Change? The UK changed from their own wiring colours in 2004.

UK had its own wiring colours until 2004 when all colours were harmonised to match the requirements of the European Union. At the moment, the colours are similar to all countries within the EU. The original red and black colour scheme was the most popular until it was retired in 2004. There was, however, a small change on the green/yellow earth wire that was introduced in 1976. Additional colour schemes for appliance flexes were also introduced in the 1970s.

Here’s what you need to know about the wiring colours. Before 1977, the Protective Earth (PE) was pure green. This was later changed after 1977 to green and yellow stripes. It stayed the same until 2004 when the colours were harmonised to match European standards. The protective earth wires have since retained their green and yellow stripes in the new harmonised colours too. As for the neutral wires, the colour before 1977 was black. The colour was also retained after changes were made in 1977. This continued until 2004. After the harmonisation to meet European standards, the neutral wires are now blue in the UK. You can still find homes that have the original black neutral colours but this would normally be old homes built at least a few decades ago.

Although these are all the major colour changes in recent decades, there were still other modifications in the 1960s. For example, before 1964, white was actually used instead of yellow for the second phase. Before World War II, the UK also used black earth and a green third phase. It’s very unlikely that we will see additional colour changes after the European standardisation in 2004. However, it will not be a surprise if subtle changes are introduced in the future.

Get a quote from an Electrician

Looking to have your home rewired? Or do you just need some electrical work done in your home? Whatever it may be, if you use the product selector and fill in the form below your details will be passed to local electricians who can quote on the work, giving you a great basis for comparison. 6 Reasons to Use Ready Mix Concrete 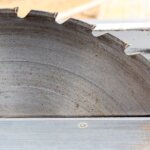 Things to Consider Before Buying a Table Saw
Share

A complete novice trying to navigate in the world of DIY. I bought my first home about 2 years ago & ever since I've been trying to research & learn how best to tackle common household problems.
Previous What is a Standard Bath Size?
Next Air Conditioning: A Complete Buying Guide