If you have been looking for television at a competitive price, the LG 43UM7400PLB is sure not to disappoint. It comes with several exciting features that set it apart from competitors within the same price range.

It is an excellent option if you have a small to a medium room where you will place the television. It is a smart TV that will keep you satisfied whether you prefer gaming or movies.

Read ahead as we discuss its exciting features, excellent picture quality, and even the optional magic remote. Find the LG 43um7400plb review below. 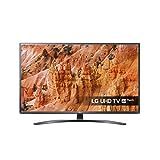 This television made its debut in the market in 2019. It comes in a 43 inches body and has a resolution of 4K. The LG 43UM7400PLB hence comes as a new standard in high definition.

It makes the picture quality on this television very good. It performs well in most daily use television needs.

If you have a large room with a comprehensive seating arrangement, this is the perfect television for you. It has wide viewing angles that suit such seating arrangement very well. Read ahead as we take you through some of the features of the LG 43UM7400PLB.

Because of the 4K active HDR present on this television, you can expect every scene to be optimized and crisp-clear. The details will stand out and look stunning on-screen as well. Every image will show great contrast as well.

This television also comes with multi-HDR format support. One of these is the HDR10, which is used quite a lot with Microsoft, Sony, and other UHD gaming consoles. Along with this is the HLG or the Hybrid Log Gamma HDR, as it is called.

It is a user-generated standard format and a broadcast format that transmits 4K signals.

This television comes with LG’s colour accuracy technology. Hence, it allows for accurate colour accuracy on screen. What this means for you is that the colours remain almost true whether you see it from the side of the front.

This is not always true for conventional TVs, where the colours may be distorted if they are viewed from the side. These colours also remain true to life giving you a realistic picture as you watch

While the picture quality is excellent, movie enthusiasts may be a little disappointed. It is because this TV does not support local dimming. This feature is necessary to dim the backlight and give you darker blacks.

That being said, the blacks on this TV are not very bad. However, the local dimming can make them much better, and seasoned movie lovers are sure to notice the lack.

Another critical reason that the LG 43UM7400PLB stands out is because it has one of the best Smart TV interfaces on the market. It incorporates LG’s refined webOS operating system. It has folders, sidebars and icons that are superimposed.

Hence, you will have easy access to smart content. The best part is that you won’t have to leave your present screen image to access the interface controls.

You will find a precise and powerful quad-core processor that uses the UHD 4K signals to the best of its capability. Hence, you will notice that the colour contrast on the screen is better because of this.

It enhances the UHD 4K and works to reduce noise. You will be delighted to know that even standard FHD signals can be easily upscaled to bring it closest to 4K clarity quickly. It is owing to LG’s Resolution Upscaler.

The detail is also enhanced, and you will find your Blu-rays shine with clarity on the screen.

You will find that this television allows you to stream programs from your Apple device conveniently. It supports Apple AirPlay 2 to enable this feature. Any 4K HDR content offered by the Apple TV App can also be viewed on this TV screen.

In addition to this, the LG 43UM7400PLB is compatible with the entire Apple system. It also supports Apple’s HomeKit.

A combination of your favourite apps on a large screen is just what this LG TV is known for. These apps are useful and look organized on-screen and are also very easy to navigate. You can stream all of your shows and movies using the Netflix 4K app and Amazon with UHD HDR.

You can also enjoy YouTube in 4K if you fancy. If you like viewing your social media on a larger screen, the TV will let you connect with Twitter and Facebook. You can also stream your music on the TV using Spotify and Napster.

You will find up to 15 HD channels, and more than 60 TV channels. You can catch up on them even after the show has been aired.

If you opt for this feature, you will have to pay an additional cost for the same. Once you get the remote, you can use its voice mic button to let Google Assistant command it. With this, you can use your voice to change the channel on the television and give other commands.

You can also view Google Maps and Google Photos as Google Assistant integrates with these. Hence, your television can become an attractive interface. If you prefer Amazon Alexa, you can use it as an alternative to direct voice commands.

The remote will also give you access to LG’s artificial intelligence called ThinQ. The remote makes browsing your television much more comfortable than if you were using conventional remotes.

LG 43UM7400PLB television has two built-in speakers. Each of these has 10W of power. The audio output and loudness are good enough if the room is small. However, for larger spaces, you will have to opt for external speakers.

Hence, if the goal is to bring a home cinema to your space, this TV won’t be able to satisfy you on its own. The sound on the speakers is, however, clear. They do not have any enhancing qualities and will give you just what the original content delivers.

If you do opt for speaker, you will be treated to some good audio in the ultra-surround sound mode.

The TV offers good screen uniformity, and you will find no banding effects on screen. However, there will be some minor Dirty Screen Effect. What this means is that the right edge your screen will be slightly darker than the left.

You can, however, expect some great viewing angles. Because of the IPS panel on this TV, you can expect a relatively wider viewing angle than TVs with VA panels.

This TV has a 60Hz panel. Hence, it cannot use motion interpolation. This means that you cannot reduce motion blur on the screen. However, you can use an alternative. Go to the picture mode menu and switch to the real cinema.

With this, any 24fps movie can be watched easily on the screen. You won’t see any blurring or judder on your screen.

Any gamer will be delighted to have this TV as their gaming monitor. It comes with an input lag of about 12ms whether it is on 4K HDR or 1080p SDR. This input lag is barely noticeable. You will have to go to picture mode and select game option here.

With this, you will have an excellent quality picture as you play. The television also supports ALLM or Auto Low-Latency Mode. This is an excellent indication that the television was explicitly designed for gaming as well.

It is because ALLM will switch to game mode automatically when it detects a console that is compatible. For instance, if you use the Xbox One X, it will automatically employ game mode. However, do note that this is only true for compatible consoles.

Here are the specifications on the LG 43UM7400PLB that will help you decide whether it is the right purchase for you.

Pros and Cons of Choosing the LG 43UM7400PLB

LG 43UM7400PLB television has a few advantages and disadvantages. Below, you can find a round-up of the pros and cons below so that you can make an informed purchase.

Price of the LG 43UM7400PLB Television

This LG 43UM7400PLB television costs way less than you imagined. It offers good value for money, especially considering that it is a 4K TV. While it is not as slim as other TVs in the same price range, it has many other features that set it apart.

The parental controls are one such feature that other TVs may lack. Further, the picture and sound quality are great if you pick it for a small to medium-sized room.

From being a great gaming monitor to let you enjoy movie nights, this LG 43UM7400PLB television is an excellent device to bring home. It has impressive picture quality and sound. If you prefer a home theatre, bring home an extra set of speakers.

The surround sound is now sure to impress. Gamers can also take advantage of the game mode. Use it to stream through all your apps, and the Wi-Fi connectivity will let you do this stress-free.

The design on this television could have been better but is satisfactory for the price you will pay. Go ahead and compare and contrast with other televisions to make your best purchase.